We’re ALMOST THERE! The time I spent banging my head against Navmesh was well worth it despite it ultimately being irrelevant to the actual fix for the problem. It’s a programming truth that it often takes several hours to figure out a 5-minute bug fix, and after about six hours over the last two weeks, I was able to track down that 5-minute fix for our “characters getting stuck problem.” That and SnapGrabbable working with gravity were the two biggest remaining bugs in the game – keyword were. I took care of the getting stuck issue and Samara was able to make SnapGrabbable work as intended. I recorded a TON of gameplay footage for Joe to use in both our showcase video and in other videos for our slidedeck.

Additionally, I was on coordinating the slidedeck updates themselves, which were pretty major after our meeting with Dr. Muschio on Thursday – he gave us some great feedback that we’ll be putting into practice this week and next week for the final (we’re still waiting on some media because our team members have a finite amount of time).

If Erin isn’t stressed, did we really submit a slidedeck? Unfortunately, I had some miscommunications with Joe about who was doing what and needed to jump in at the last minute because I hadn’t realized some things were my responsibility. Additionally, late materials from teammates greatly delayed my gameplay recording (I finished about 7 hours later than originally planned) and my compilation of the slidedeck itself. We also ran into some issues actually submitting it, because why not? I’ll be planning to get to this MUCH earlier next week for the final so I don’t actually have a heart attack 2 weeks before the showcase.

Also, I didn’t get to the updated soundtrack implementation like I wanted to. However, I did chat with Shiloh about structure and whatnot, and only have a few more decisions to make before I get all the new stuff in. It’ll be done by this time next week.

Positives: Okay, so here we are, nearly at the end. Madeline is finished, re-textured and implemented, which is awesome.

Victor is nearly done also which is great, he should be done by tomorrow. 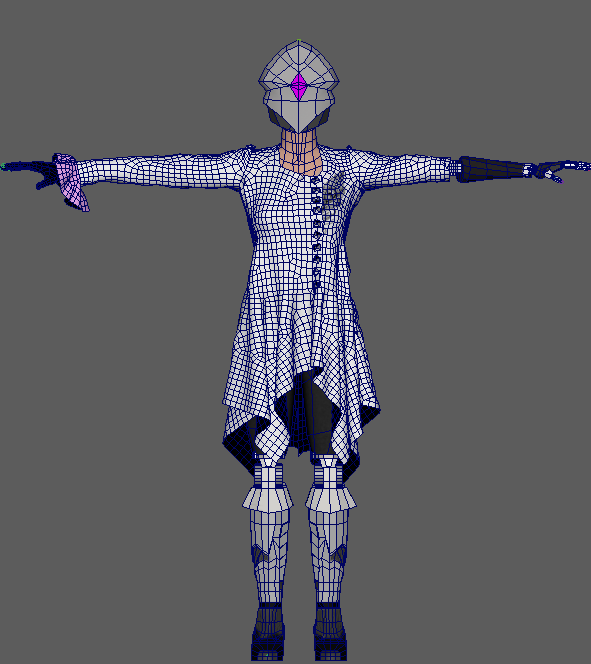 Negatives: I didn’t finish Victor this week, and I had some issues with fixing Madeline the previous week, but hopefully thatll be behind us soon.

Positives: I……I think I’m done? I feel bad as a team lead waiting to be told to do stuff but I think at this point I just need people to throw stuff at me if they need help. Our bug video was cut down to things that non-game devs will hopefully understand and find funny. ALL VOICE LINES ARE IN! YAY! I am now ready to take on whatever other people need help with as long as I can handle it.

Negatives: I goofed and forgot to fix the bar model for Cris after I called my mom. I got it to her a bit late so that was completely my fault.

Positives: I got a ton done this week, even though I missed basically a week from being sick. The machine got fully painted, and went through some initial iterations, baked, and implemented in game. The piano got textured, baked, and put in game. Textures on the machine also got baked and implemented. Really just about everything in our scene item model log is textured now, save maybe a side table or two.

Negatives: As a running theme, being sick for nearly a week wasn’t great at all, especially since I still have my other class work to do. That being said, I’m mainly satisfied by feeling better, and a lot got done this week too. Some pipeline issues pushed back texturing the bar some, but other than that, it’s just jars and small things that need in game materials.

Looking Ahead: Texturing more areas and adding in some VFX

Positives: I’d started doing materials for the machine earlier, so that’s in the works, and I got to do some smaller materials for the filler objects around the room. There was also a lot that went well for other projects, just not this one. I was demoing two other VR games for Philly Tech Week this week, so that was cool, but I definitely was pressed for time to work on this.

Negatives: After doing the demo on Friday I also got too sick to work, and had flu symptoms for the weekend and into the early week as well. I’m working on getting better, but didn’t get much else done, so playing catch up.

Looking Ahead: Texturing more areas and adding in some VFX